A shoot and dodge-em up

All done in the best possible taste !

Can you achieve mega-turd status?

Introducing Turdesley, in the first of his adventures.

It's a tough life being flushed away. Guide him in his travels down the pipe.

Dodge or shoot all manner of nasties with his trusty condo-cannon.

Travel through the worlds 'Pipe Central', 'Skull City' and the 'Kingdom of Mighty Two'.

Destroy Mighty Two and head to the sea, it's as simple as that.

Pressing Fire will suck in our Hero's cheeks and send him down for quick fire shooting.

Up and fire together for stationary shooting.

Pressing down will again shrink Turdesley for quick movement and to get through narrow passageways.

Follow the signs and arrows which show the way to the exit points.

Energy blobs can be released by shooting multiple nasties, so fire that condo-cannon like Neo !

Beware of the moving blobs which will zap energy as well as pipes and other scenery.

There are 3 skill levels:

Only by completing the hard level can you achieve full status!

Turdesley is based on a character created by Davey Sludge

Testers (spammed until they relented)

Thanks to Seb 'King Seudster' Braunert for all the help, advice, motivation and the creation of the official Seud Facebook group, which has now seen multiple great new SEUD games created.

If not used to playing ZX Spectrum games on a PC you will need a ZX Spectrum emulator program such as FUSE which is free to download.

Physical tape release available to buy from Phoenixware including the 48K and 128K versions of the game on the same tape.

Down the Pipe - Out Now! - Phoenix Ware 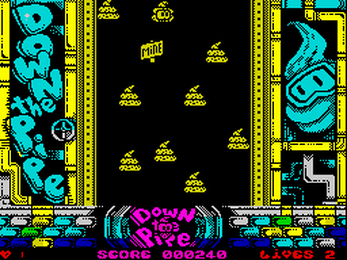 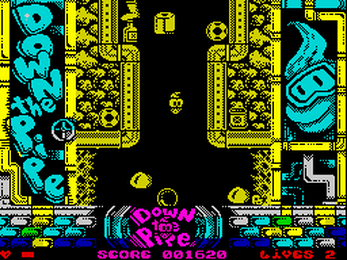 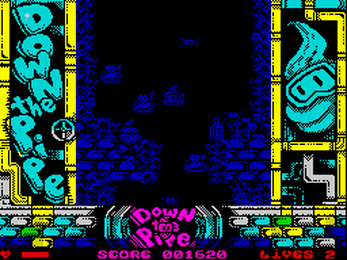 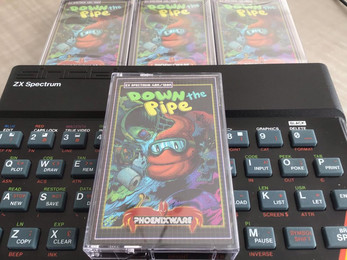